The Metropolitan Opera in New York is one of the finest opera companies in the world, and disputably the leading opera company in United States. It occupies a huge glittering opera house with crystal chandeliers in New York City and commands budgets that allow it to present top opera singers and to build complex sets and costumes. It was founded in 1880 and for decades its Saturday afternoon live radio broadcasts reached into even the smallest town in America. Today its HD TV broadcast is seen all over the world. However, by late 20th century, the Met was considered as bastion of conservative establishment opera production while the world around it spun around experimenting with a medium that is notoriously challenging but not unchangeable.

I was therefore surprised that the opera I was asked to design for the Met, The Voyage, was in fact a new opera by Philip Glass, highly acclaimed but controversial contemporary composer, with libretto by David Henry Hwang, also acclaimed but also controversial Asian American playwright. The opera was commissioned by the Met to commemorate the five hundred year anniversary of Columbus’ voyage in 1492 to the unknown “new world”. Contrary to Met’s conservative reputation, it gave both Philip Glass and David Henry Hwang full and generous support to create the new opera. In addition, every aspect of the production was given exceptional attention with lavish budget, extra rehearsal time, and top musical expertise. In fact, I had never before (or since) worked on a production that seemed to be so much a center of attention, unusual for a large and sometimes unwieldly organization, which nevertheless tried to bent every whichever way to help us do our best work. There were literally hundreds of costumes, many extraordinarily complex and challenging. Every challenge only made the costume shop staff work harder and be more supportive and imaginative. It was as if something had broken free in the old well-oiled machine and we were the beneficiaries.

It was Philip Glass who had the specific idea about the story of The Voyage. The opera would not be about the specifics of Columbus’ voyage. Columbus’ quest would only be the center from which the story grew to examine the basic human urge to explore. As Glass said, “I didn’t want to do a historical Columbus. If you want to know about Columbus, you can go to the library. The opera house isn’t a good place to deal with reality. What we can do is make it a workshop where allegory and fiction and poetry are brought to a level of the investigation of the human condition.”

So our opera went back to the past and then into the future, and it left the earth for other planets. A visionary scientist in a wheelchair (homage to Stephen Hawking) who floated many feet above the stage served as the opening image. He is contemplating human ability to transcend limitations of body and mind to explore the infinite. A spaceship is hurtling through galaxies while members of her crew contemplate their past and dream of worlds they would like to visit. When the spaceship crashes, it is met by strange exotic people with bird’s heads. In Granada in 1492, Queen Isabella and her courtiers, and clergy are saying good-by to Columbus …who is actually dreaming on board the Santa Maria. The queen re-appears to him first as Madonna surrounded by radiant light, then in guise of sea monsters. We are suddenly in a space station in our solar system in the year 2092 where astronauts scan the universe, seeking the origins of life. A Commander contemplates the eternal quest of humanity, to explore and discover. Will the quest be reached in her next voyage? She gets a jubilant send-off from various dignitaries who, improbably but possibly, include the Emperor of China. In the final scene, Columbus is on his death bed. It is 1506. Monks chant a requiem and Isabella comes to accompany the explorer to the realm of which she already is part. Columbus is lifted to the stars.

I have never before, had the opportunity to design such a large and disparate array of characters: spacemen from the past and future, natives of unknown planets, 15th century Spanish courtiers and clergy, Columbus and his ship’s crew, world leaders of 2092, sea monsters, floating scientists, angels, and more.

The Voyage is a profound piece, which has unfortunately not been performed as often as it deserves to be. This may be due to its breadth and technical demands. It is, however, a dream project for any designer who likes to examine the limits of her creativity.

Next production, Oedipus and the Symphony of Psalms 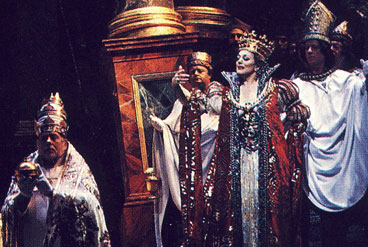 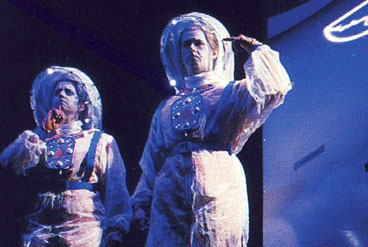