Oedipus Rex is a unique composition by Igor Stravinsky who chose to call it opera-oratorio. It comes from the composer’s so called neo-classical period, and was premiered in Paris in 1927. It is based on a play by Ancient Greek playwright, Sophocles. Stravinsky had the French libretto translated into Latin, the language it is still sung in today. Stravinsky’s direction for the performance of his opera-oratorio specifies that all characters except for Tiresias, the Shepherd, and the Messenger, should be like “living statues”, masked and heavily costumed, moving only their arms and their heads. The chorus has only their faces revealed. Musically, Oedipus Rex is closely related to Symphony of Psalms, also set to a Latin text. Oedipus Rex is only an hour long; consequently it is usually paired with other Stravinsky short operas, such as Mavra. The director, Peter Sellars,decided to accompany Oedipus Rex with Symphony of Psalms. Stravinsky had not intended that Symphony of Psalms be staged. In Chroniques de ma Vie Stravinsky commented, in reference to a performance of Parsifal, on the “unseemly and sacrilegious conception of art as religion and the theatre as temple.” It was therefore important not to compromise Stravinsky’s artistic vision. Today, we tend to confuse religion and spirituality. Religion represents a belief in a divine power that should be obeyed and worshipped; spirituality represents a relationship to the world that is not based purely on material existence.

In creating our original production at Salzburger Festspiele, a prestigious summer music festival in Salzburg, Austria, we decided that the chorus would wear same costumes for both compositions. The chorus served as a bridge between the pieces. The contemplative nature of Symphony of Psalms was also influential in setting the overall tone for Oedipus Rex. The performance became a journey from plague afflicted Thebes to a place where the anguish that permeates Oedipus Rex is expressed again, more formally, and redemption is achieved. The design of the chorus costumes went through its own journey. In the mid-1980s director Peter Sellars introduced me to Robert Farris Thompson’s book Flash of the Spirit, African and Afro-American Art and Philosophy. In 1993 Professor Thompson had written an essay for Divine Inspiration, from Benin to Bahia, a book by Phyllis Galembo, which documents religious shrines in Nigeria and Brazil. These two books made strong impression on both of us. We spoke about ideas and images in these two books during our first meeting for Oedipus Rex and Symphony of Psalms. Our work together, over the years, has often been pre-faced by one or two hours of talk about books we are reading and about ideas we are contemplating. These are our “jazz” improvisations when our individual personalities closely follow each other’s creative ideas. We were both fascinated by the implications of the essays in Flash of the Spirit and in Divine Inspiration, by the wealth of original material and by the brilliant color photographs. In Divine Inspiration we were fascinated by photographs from Benin that portray people dressed for worship in tunics that are made of strips of red and white fabric. These strips of color break the surface of each garment in a manner that can only be described as percussive, because of the continual contrast that the placement of individual strips creates. There is a sense of movement that is as startling as when two hard objects hit each other. The reason for breaking up the surface in this manner is captured by West African belief that evil travels in straight lines and to break these lines acts as a powerful deterrent to evil.  This notion became the basis for the design of chorus costumes. However, we did not want to reproduce clothing of West Africans. It is inappropriate to take something that is sacred to a people and use it for our own purposes. We envisioned the chorus as a group of elegantly dressed prosperous citizens of Thebes who fear the destruction of their world. I drew a suit or a dress for each chorus member in small scale so I could place the strips of white and red onto the chorus as a whole. I was creating an image that we saw as the chorus arrived on stage, similar to an abstract painting. The effect was very disturbing and reflected the distancing effect that Stravinsky created by using Latin and having a Speaker comment on the action.

Next production, Tales from the Vienna Woods. 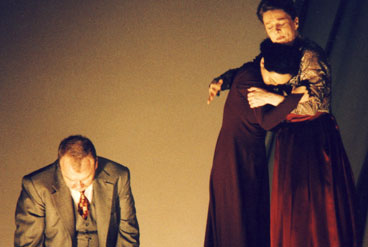 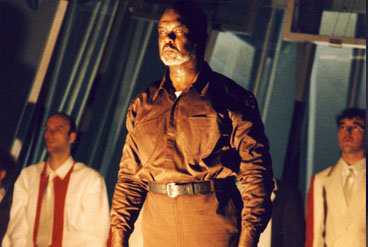 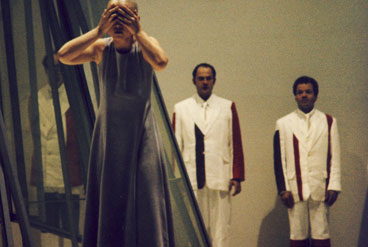 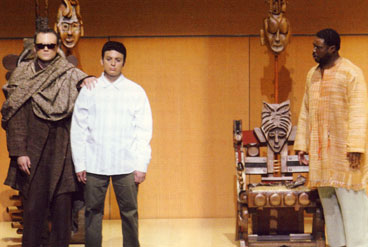 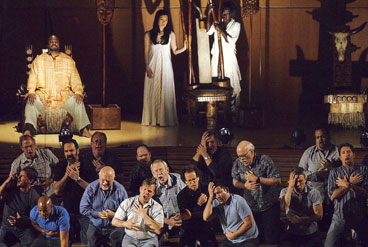 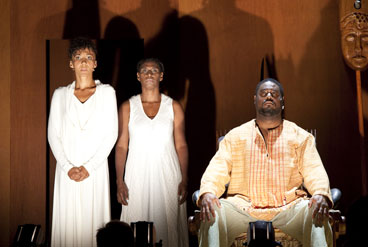