I designed Luisa Miller in 2000. This production with my costumes was just revived at San Francisco Opera (opened September 11, 2015).

I must admit that this is not one of my favorite operas. Though musically it is important in Verdi’s development as a composer, I have never found the music in any way interesting or moving. The libretto is based on a play by important German playwright Friedrich Schiller (Kabale und Liebe) but it lacks Schiller’s refined approach. In fact, the plot is rendered banal and the music, for me is not deep enough to redeem the flimsy premise.

In designing the costumes I felt constrained by Francesco Zambello’s wish to not explore too deeply what was not so deep to begin with. I do believe that she was correct to not try to create something that just wasn’t going to be supported by the music and libretto, but it made for a somewhat uninspiring project.

I was therefore surprised that this lackluster production was being revived and was slated to open San Francisco Opera’s 2015-2016 season. Fortunately, the cast was sufficiently talented to make at least the music critics happy.

Next production, An American Tragedy. 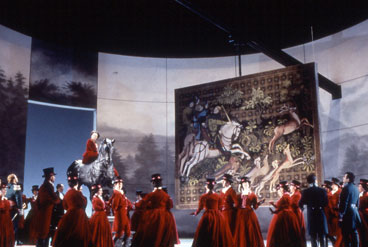