The Metropolitan Opera performance in 2005 marked the world premiere of this opera.

In 1925 American writer Theodore Dreiser published his powerful novel, An American Tragedy. Dreiser had begun his career as a newspaperman writing for the Chicago Globe and later for the Saint Louis Globe-Democrat. The human interest stories he covered for these newspapers later served as inspiration for his socially conscious novels. An American Tragedy was his first commercially successful novel. An America Tragedy was based on an actual crime. In 1906 a young man, Chester Gillette, murdered his pregnant girlfriend. Though the full details of his motive were never established, it is likely that Gillette was ambitious to marry well, while his girlfriend came from a poor family. Unlike today, during this period it was considered inappropriate for a woman to have a child out of wedlock. By giving birth to a child while unmarried, a woman faced ostracism. Her child too would be snubbed by society as a bastard. Gillette’s trial gained national attention. His crime was unfortunately not unique but his particular circumstances made his story interesting. He came from a well-to- do family, though both his parents renounced their wealth to become members of Salvation Army. He was a handsome, intelligent young man with pleasing manners; he did not fit the stereotype of the kind of man who would commit such a sordid crime.

I designed costumes for Tobias Picker’s Emmeline, an opera also based on a true story. I was therefore very happy that Francesca Zambello (director of An America Tragedy) chose me to design the costumes. Adrianne Lobel, my long time scene design collaborator, designed the set. Our principal singers (who became known as “The A-Team”) included Susan Graham and Patricia Racette (Emmeline in the opera of the same name). The Metropolitan Opera was our venue.

From the beginning of the design process we agreed that the silhouette of the costumes should be drawn from the late 19th century and early 20th century, the period of Chester Gillette’s (Clyde in Dreiser’s novel) youth and adulthood. The costumes were to be true to the period, and not stylized in any way. Color was the only stylization. Clyde’s childhood environment was somber and pious, as was the clothing worn by his family. Color palette for the workers at the factory where Clyde meets Roberta (Grace Brown in the true story) was less somber but still devoid of any richness of tone. Costumes worn by members of the wealthy society that represents Clyde’s dream were full of lush color and glittering detail.

There are many difficulties that are part of costume design for opera. One of the most important is the need to disguise the fact that singers are chosen primarily for their voices. Singer with a perfect voice for the role may be much older than the character he or she was chosen to portray. Singers also tend to be very overweight. This means that in the opera by Verdi, La Traviata, Violetta, a young woman who is dying of consumption may actually weigh 200 pounds, and be 45 years old. Opera audiences are familiar with this dilemma and tend to be forgiving in their judgment of appropriateness of a particular costume. In An America Tragedy my challenge was Susan Graham who was cast to sing Sondra, beautiful very young wealthy woman who is fascinated by Clyde, and who becomes the reason why he murders Roberta. Susan Graham is a very attractive woman but she is not 18, and she looks mature. Francesca Zambello pictured her as wearing very sophisticated clothing as a contrast to her youth. Unfortunately, sophisticated clothing made Susan Graham look older, not younger. In my view, my costumes failed to fit Sondra’s character. On the other hand, Patricia Racette, whose character is in her early twenties was very convincing wearing the costumes I designed for her.

One special memory I have of this project, is the time I spent with Tobias Picker going over his score for An America Tragedy. This was immensely helpful, since his operatic music emphatically reveals the inner lives of the characters.

“Something seems lacking, however, in depiction of Clyde, a man who must be sympathetic though deplorable, ‘immature….a soul not destined to grow up’, in Dreiser’s words. Picker crafts a vocal portrait of the protagonist that is so laden with ambiguity as to seem unfocused. Clyde’s desire, melodically, remains furtive; even the passionate, exalted declarations to Sondra are quick, staccato outbursts lacking a compelling lyric component.”

I happen to completely disagree with Mr. Baker. I feel that Tobias Picker’s understanding of Clyde is profound. Clyde is an ambiguous character. He does not have a center. He is morally vague and unsure of himself. His soul, in fact, is vacant. And where a soul is vacant, evil finds room. 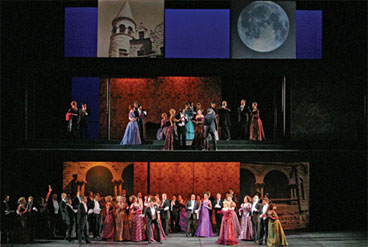 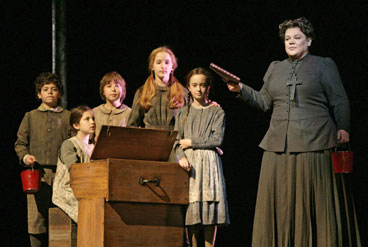 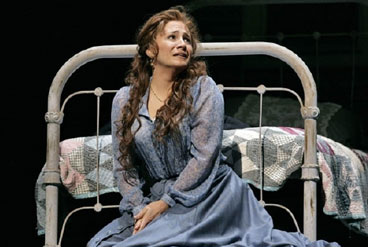 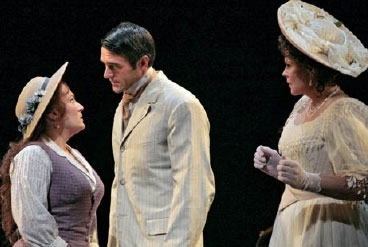 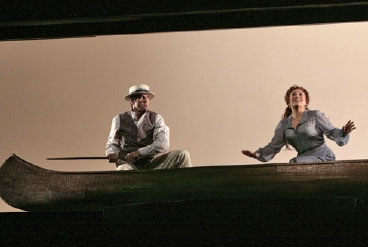 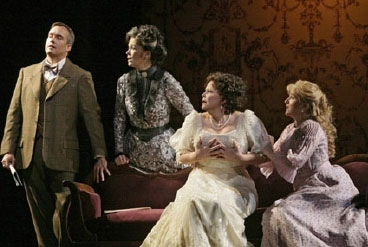