Venue:
Opened at Perm State P.I. Tchaikovsky Opera and Ballet Theater in Perm, Russia
and was also performed at Teatro Real in Madrid, Spain,
as well as at English National Opera in London, Great Britain

The Indian Queen was produced by Teatro Real in Madrid, Spain and Tchaikovsky Perm State Opera in Perm, Russia.

Peter Sellars had been interested in producing this unfinished Purcell semi-opera for some years. As with Purcell’s other semi-opera, The Fairy Queen, The Indian Queen’s plot or story line was performed in dialogue by actors, not sung or spoken in recitative as in traditional opera. Singers sang songs with content that was related to the story but served primarily as musical accompaniment.

This type of composition allows flexibility in use of libretto. It is as if the music provided a theme while the dramatic part of the art-work is flexible and open to new interpretations. The inspiration of Purcell’s The Indian Queen was aplay by Robert Howard and John Dryden, 17th century English playwrights. Interestingly, the play depicts Mexican and Peruvian royal courts before the Spanish conquest. There is very little that can be said to be authentically Peruvian and Mexican in this play since historically accurate knowledge was not readily available, nor was it sought for this kind of work of art. So the drama depicted is mythical instead of historically accurate.

One of the reasons that Peter Sellars was interested in producing The Indian Queen is his admiration for Purcell’s Christian hymns. They are, indeed, exquisite and deeply moving. He chose a number of these hymns to underline the dramatic action that he created for this production. He also chose to center the story on the initial contact between the Maya people and Spanish conquistadors. Peter introduced me and the artist Gronk, who designed scenery for The Indian Queen, to Mayan art which he had explored for some years as potential inspiration for The Indian Queen.

Pre-Columbian Mayan art is deeply creatively stimulating. Both Gronk and I very much enjoyed designing this project. Unfortunately, the actual production of the costumes was beyond difficult. The original intent was to open The Indian Queen at Teatro Real in Spain. For various complex reasons, quite late in the production, it became clear that the opera would have to open in Perm, Russia, not in Madrid. Perm is in Siberia and neither Gronk nor I were able to travel there. Consequently, it was my very talented and extremely dedicated assistant who flew to Russia with Gronk’s equally capable assistant to supervise the creation of costumes and sets, a difficult task but with current Skype technology, not impossible. Fabric for the costumes was purchased in Los Angeles, to give me the ability to control this very important aspect of my work as a designer. Unfortunately, none of us were fully prepared for Russian bureaucracy and worse. It became clear, about three weeks after my assistant arrived in Russia that the fabrics would never arrive there in time to make the costumes. The reasons for this would have amazed even Gogol! The only choice was for my assistant to fly back to Los Angeles, put the fabrics in her luggage and fly immediately back to Perm. She had to be accompanied by no less than the Opera House Ballet Master (the only man there with a current American visa) since there is limit on personal luggage. A question that haunts me still is what exactly the Perm Opera management had to do to pass the luggage through customs.

There are times when logistics of my profession negate memory of my artistic process completely. The Indian Queen is definitely an example of such negation.

The Indian Queen was also performed at English National Opera in 2014 and will be shown at De Nederlandse Opera in Amsterdam in 2017.

Next production, The Fairy Queen. 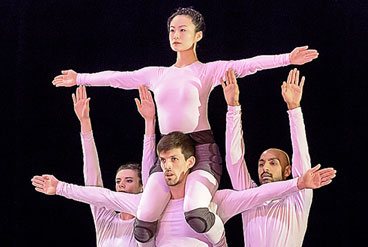 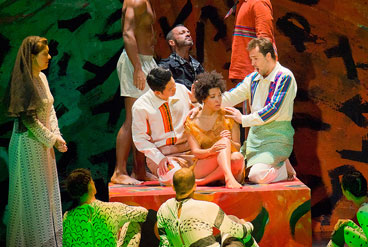 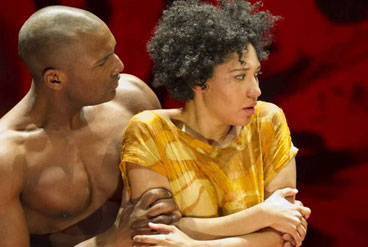 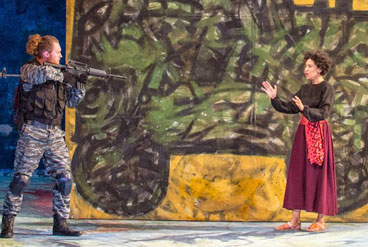