This production was also seen at Edinburgh International Festival,
Edinburgh, Scotland where it was performed at King’s Theatre. It was also
performed at San Francisco Opera, San Francisco California (in 1993),
and New York City Opera (in 2000)

La Clemenza di Tito is the last opera Mozart wrote before his untimely death at the age of 45. He fell ill in Prague which he was visiting for the September 6, 1791 premiere of La Clemenza di Tito. He died in Vienna on December 5, 1791.

I have always felt close to this particular opera. In fact, La Clemenza di Tito is my favorite opera. While La Clemenza di Tito was very popular in the century following Mozart’s death, it was rarely performed during the first half of 20th century. It began to be staged more frequently in the 1980s and 1990s. Certain critics regretted Mozart’s return to genre of opera seria, a style that dominated European opera for decades between early 18th century and the 1770. For me, opera seria is the perfect style to employ to tell the deeply moving story of Emperor Tito.

At the center of the story is clemency, the highest form of forgiveness: mercy. Tito is the Emperor of Rome. Sesto is his close friend. Sesto’s passionate love for Vitellia causes him to conspire against Tito, who becomes aware of the conspiracy and suffers the pain of betrayal. Yet, instead of punishing Sesto, he forgives him. The plot is simple, but the implications of the ability to forgive create complexity and depth which Mozart’s genius endows with singular power and pathos.

In conceiving the production, director Stephen Wadsworth was inspired by the Velvet Revolution, a name given to the extraordinary non-violent transition from communism to democracy in the former Czechoslovakia, my birth country. At the center of the events that inspired admiration all over the world was Václav Havel, a dissident, a world renowned playwright (who subsequently became President of Czech Republic.)  In Prague (the same place where La Clemenza di Tito opened, almost to date, 202 years before) students and artists led non-violent protests which eventually succeeded in attracting majority of population and led to dissolution of the communist government. Havel’s choice to not prosecute Czech communist leaders was inspired, I believe, by the understanding of the power of forgiveness. In life, unlike in Mozart’s opera, those who were allowed to go “free” were not grateful for the clemency they received. Human nature does not respond to goodness as well as to evil. Nevertheless, Czechoslovakia did not descend into the nightmare violence and destruction that took place when Yugoslavia’s communist government fell. There was no forgiveness there, instead there was violent retribution that invited reciprocal retribution and the cycle of hatred has not been broken yet.

After considering the Velvet Revolution, Stephen, I believe wisely, decided to tell the story in the world contemporary to Mozart, instead of to us. Our setting was the French Revolution which began in 1789, two years before Mozart’s death. Mozart was a man of his age. He set his opera in Ancient Rome since he lived in a monarchy and deposing kings and queens was not a topic that would have been tolerated by the rulers. Stephen wished for the chorus to represent all walks of life in pre-revolutionary France. As a director he has the ability to inspire each member of the chorus to create a singular character. It was important that the people of Rome (Paris) could touch the audience as individuals concerned with their freedom and safety. In a moving tribute to the Velvet Revolution, Stephen staged the chorus to arrive on stage each carrying a lit candle, an event that took place in Prague in 1989.

Our opera was co-produced in 1991 by Houston Grand Opera, Canadian National Opera, and Scottish National Opera to mark the 200 anniversary of Mozart’s death. This production was also seen at Edinburgh International Festival in Scotland where it was performed at King’s Theatre. It was also performed at San Francisco Opera, with Frederica von Stade, a brilliant American mezzo-soprano, as well as New York City Opera. Our Sesto for majority of performances was Lorraine Hunt Lieberson, another exceptional American opera singer.

Sadly, my costumes were poorly made and yet, I had to see them resurrected over and over. That is one of the hazards of my profession, since my designs are only as good as the people who make them, and in this case, there was definite lack of expertise in 18th century silhouettes. The co-producers had spent their money and did not want to spend more to correct mistakes, but over the almost ten years that the production traveled the world, I was able to replace the most visible examples of poor workmanship, so that the last time we presented La Clemenza di Tito(in New York in 2000), the costumes were finally almost as I had designed them. 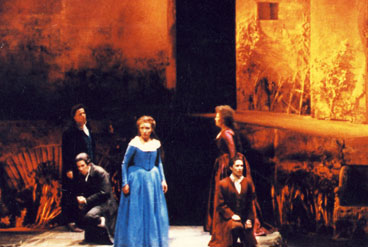