Emmeline is an opera based on true story of the tragic fate of a young woman who grew up on a farm in Maine in the late 1830’s. When she was 13 years old, in order to help her impoverished parents and siblings, she was sent to work in a factory that manufactured cloth. There she was made pregnant by the mill supervisor. Her aunt helped to hide her secret by putting her child up for adoption. Her family was never told what had happened. Emmeline returned to her home. She did not marry for many years until she fell in love with a man years younger than she, newcomer in town. Eventually it was discovered that the man she married was her son.

This powerful story attracted writer Judith Rossner, who turned the true story into a novel. Tobias Picker, then a young American composer made the story into an opera with the help of poet J.D. McClatchy.

I have always been interested in working on new plays and operas, and Emmeline promised to be a very special project. I began the design by doing research into the period and place of the true story. Although photography had only just been invented in 1830s, I found good amount of photographic material, not only from the period but specifically from the North East of United States. I found documentation about young women who worked in fabric mills in Maine, Vermont, and Massachusetts. When I met with director Francesca Zambello, we both agreed that little needed to be invented in designing the costumes. Tattered clothing worn by poverty stricken farmers in Maine clearly demonstrated the bleak condition of their lives. The severe black uniforms that young women working in the mills were forced to wear symbolized the hardship of their lives spent in back-breaking work. The somber dark three-piece suits with shirts with high collars worn by the men in charge of the girls were appropriate expression of a society that turned a blind eye on the factory-owner’s son-in-law with the predilection for sex with teenage girls. My work consisted of fine-tuning the already very appropriate material for our production.

When designing opera, the costumes have to reflect not only the story but also the music. In this case, the music did not originate in 19th century but revealed late 20th century idiom. Tobias Picker’s operatic compositions have been called “unapologetically conservative” but from my point of view, his music is deeply concerned with expression of the emotion of the inner lives of the characters. Set designer Robert Israel and I closely collaborated on creating Emmeline’s stark world which was mostly devoid of color. Color was used to emphasize hidden emotional connections. In the first act, the wife of Emmeline’s seducer expresses her understanding of Emmeline’s vulnerability and innocence by covering her with delicate lace shawl. This shawl is the only warm vivid color in the entire design. In the second act Emmeline lovingly puts the shawl around the shoulders of her sick mother. The color of Emmeline’s own dress in the second act is a pale reflection of the shawl’s warm color. This small stylization reflected some of the thematic stylizations in Emmeline’s arias.

In one of the early scenes, we see Emmeline’s brothers and sisters. The scene takes place in November when it is very cold in Maine. I had designed the children as barefoot, basing my choice on stories I heard from my own father who grew up very poor in a farming community in Slovakia. He and his brother only had one pair of shoes between them and so had to alternate the days when each went to school. Emmeline is not so much a story of incest, as a story of poverty that forces parents to send their vulnerable young daughter away from home. The consequences are tragic and irreparable.

Next production, The Inspector General. 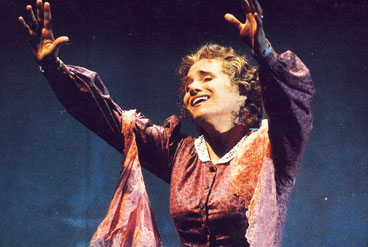 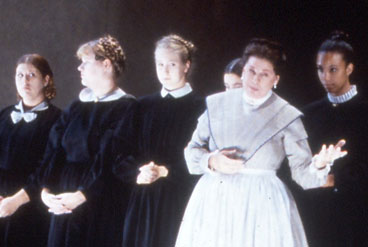 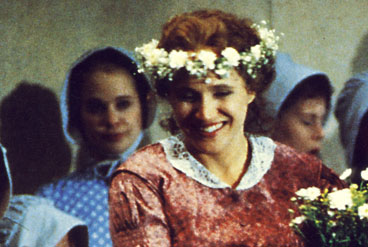 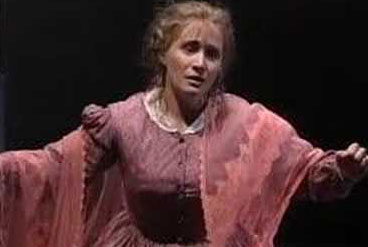 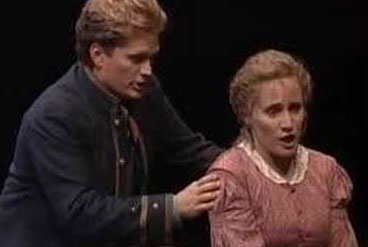